Made in America is Making a Comeback

Before the early 1980’s, manufacturing was largely a domestic process in the United States. But as advances in technology, communications and transportation opened the doors to a global economy, businesses began taking advantage of manufacturing overseas. Computer-based automation, programmable logic controllers, cheap labor and faster cargo ships led many American companies to move production offshore to places like China, South Korea, Vietnam, Indonesia, Thailand and Mexico.

Offshoring soon became a common business practice, and trade policy actions at the time made it easier than ever. For the next 20-30 years, the cost benefits and higher profits of producing goods overseas were simply too good to pass up – and in some industries, keeping pace with the competition demanded it.  At the height of the offshoring era, about one in five manufacturing companies had production facilities in China.

In recent years, however, businesses have been rethinking the practice of offshoring. Political pressures, increasing overseas labor costs, intellectual property (IP) concerns, the demand for higher quality products, domestic job losses and growing concerns about overextended supply lines have led many U.S companies to consider bringing production back to U.S. shores. Domestic production offers financial and logistical advantages such as:

Enter COVID-19, the great accelerator of global economic trends. Just as it fueled the dramatic growth of megatrends like automation and ecommerce, the pandemic exposed the inherent fragility of our thinly stretched supply chains.

The arrival of COVID-19 has sparked new dialogue about how to source goods from a global market in a way that minimizes time and costs while also being less susceptible to interruption. Instead of focusing exclusively on cost and efficiency, manufacturing companies are now putting a greater emphasis on risk mitigation and resiliency. The result is a greater demand for excess capacity and diversification in sourcing while intensifying onshoring initiatives.

The COVID-19 pandemic highlights the inherent risks of relying exclusively on suppliers located halfway around the world. In China, for example, where large numbers of people work in close quarters, COVID-19 spread like wildfire, forcing plant closures and interrupting orders. Companies who were able to maintain at least some level of production faced inflated shipping costs because of logistical constraints.

The current crisis has also revealed our overreliance on other countries as critical sources of medicines, medical devices and personal protective equipment. Committed to reshoring the production of components critical to national security, Federal and State governments are offering manufacturers incentives to reshore assets for the production of personal protective equipment, medical devices, pharmaceuticals and products associated with national defense. 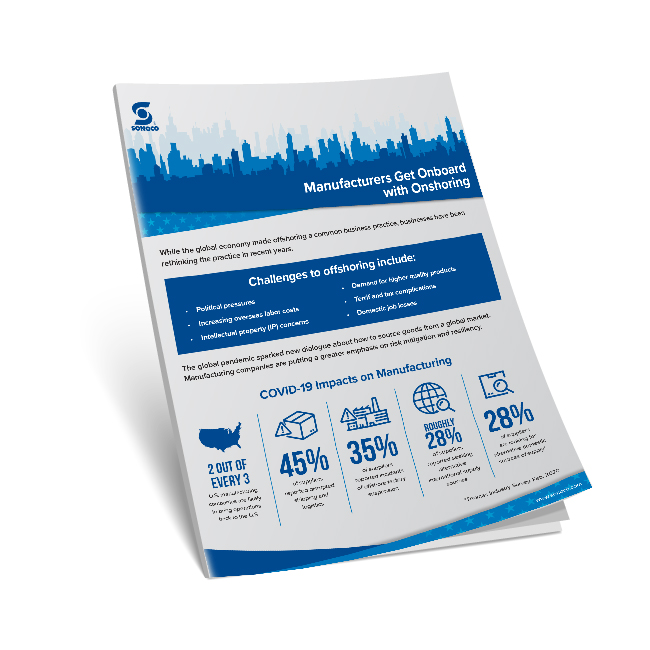 Despite the dramatic impacts a global calamity like COVID-19 can have on business operations, the pandemic has not been the only cause of recent supply chain disruption. The U.S.-China trade war has also prompted companies to consider moving production capacity back to the U.S. The Trump administration’s new policies reward manufacturers with a variety of incentives for onshoring and reshoring, while imposing increased taxes and other penalties on companies who continue offshoring.  As a result, many major American companies have either cancelled offshoring plans or decided to move production to the United States.

Faced with increasing risks, trade tariffs and rapidly shrinking cost benefits, more American-based manufacturers are expected to embrace domestic production moving forward. If your company is thinking about onshoring or reshoring, consider the following recommendations in your decision-making process:

Speed – Simply put, local production is faster. Offshoring involves the shipping of goods, materials and services to faraway places, which automatically increases lead times. Additionally, if customer demands require modifications, changes can be implemented and put in market much faster by a localized supplier.
Risk Aversion – There are risks associated with making products or parts overseas that can be mitigated through reshoring. Quality control and consistency can be supervised more closely and there are safety regulations in the U.S. that might not exist in other places. Using a domestic supplier for injection molding carriers minimal intellectual property and compliance risks as well.
Convenience – Working with a domestic partner for plastic injection molding gives you more design control, flexibility and better communication.
Quality – Third-party manufacturers who have extensive experience and expertise in plastic injection molding can ensure your project meets or exceeds U.S. industry standards and your own specific quality control requirements.
Simplicity – Onshoring makes finalizing designs and production runs easy. Less complexity also means more time to focus on what you do best.
Savings – Onshoring significantly reduces shipping and logistics costs because your products or parts won’t have far to travel.

A variety of terms are used to describe the various location strategies for manufacturing production plants.  Here’s what each term means:

Reshoring – Practically synonymous with “onshoring” and the two terms are often used interchangeably with one slight difference. Reshoring refers to an operation that is returning to the U.S. after having been moved out of the country previously.

Nearshoring – Refers to the movement of manufacturing assets or contracts to companies outside of the United States but still close enough to keep shipping and related supply chain costs affordable.

Offshoring – Refers to outsourcing manufacturing or moving assets outside the primary country of operations. American companies have been offshoring production to Asia and Southeast Asia for many years. Offshoring has become less popular in recent years due to higher costs, complex logistics and politics.

2 out of 3 U.S. Companies Likely to Move Production Back to U.S.

According to a recent issue of the Thomas Industry Survey, about two out of every three American manufacturing companies have reported they are likely to bring operations back to the U.S. The report says the epidemic may prompt manufacturers to more aggressively diversify their supply chains and consider reshoring some of their production capacity. Some 45% of suppliers reported disrupted shipping and logistics, while 35% reported incidents of offshore factory suspension. Roughly 28% of suppliers reported seeking alternative international supply sources, while another 28% are looking for alternative domestic sources of supply.