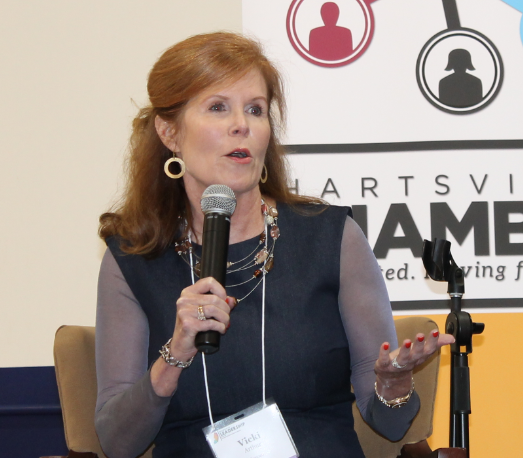 Originally from Hartsville, S.C., where Sonoco has been headquartered since 1899, Vicki Arthur had just earned her CPA during a brief period in public accounting when she decided she wanted more. A locally headquartered global enterprise didn’t seem like a bad idea, and in 1985 she joined Sonoco as an entry level accountant. She quickly grew her skills in financial reporting, and the knowledge enabled her to use her understanding of financial statements to grow into other areas, like SEC reporting and managing global operations.

“My desire was always to learn, and Sonoco offered plenty of opportunity to do that,” she says.

Learning opportunities provided a great opportunity early in Vicki’s career. But, what led her to stay with Sonoco for more than 30 years?

“It’s because of the people, the challenges and the growth – really in that order,” she notes. “Throughout my career, Sonoco associates and leaders helped me meet the challenges I faced in every new position, and I grew and matured with every single opportunity. In my 33 years, there have certainly been ups and downs, but very few downs.”

Throughout her career, Vicki has been assigned major change initiatives in which she excelled. She took on many of these opportunities while maintaining her current job functions. She believes they are the reason she developed strong leadership skills.

The shift from an accounting career to a global operations role may not seem like an easy transition, but Vicki notes it was Sonoco’s leadership who set her up for success.

“’The executive team believed in me, actually more than I believed in myself,” she notes. They pushed me to accept more personal challenges than I was sometimes comfortable accepting. My bosses and mentors pushed me to do more. When Harris (Harris DeLoach, Sonoco President and CEO from 2000-2013) asked me to move from the treasurer’s role to a corporate customer role, I firmly told him I was not a sales or marketing professional. He looked back at me and asked, ‘How do you know?’”

The move seemed to come at a challenging time. With two teenagers at home and travel to complete her MBA, Vicki was concerned about balancing it all. Plus, she loved her current role and felt she had plenty more to learn in treasury. But, like she did throughout her career, she accepted the challenge.

Working in the male-dominated manufacturing industry, an industry where women make up just 29% of the workforce in the U.S., Vicki does believe Sonoco’s female representation has changed over the years, both in numbers and recognition. She notes a consistent, daily concerted effort to ensure the company is increasing and improving diversity, but admits there is more work to be done.

“It shows up in the little things that happen in your own interactions, maybe the belief that differing views are better than one, learning to listen more, supporting someone who has accepted a major change, mentoring or simply caring about someone’s growth,” she says.

It is her diverse background that enables Vicki to examine things from many different angles. She is a strong advocate for her associates and believes that with the right tools and opportunities her employees can rise to meet almost any challenge. And, she doesn’t take “no” for an answer.

Her advice to young women considering a career in manufacturing is clear.

“If you are interested in really learning and growing, there is no better field for young women,” she says. “From the concepts and designs, to the plant operators and packers, and ultimately to the customers and consumers, there are so many people to interact with and learn from.”

As she looks back on her career, she thinks of a quote by a writer named Sydney Harris. “The highest reward from your working is not what you get from it, but what you become by it.”

In her 33-year career, Vicki Arthur has become a leader in the manufacturing industry, a mentor to many and an international businesswoman.